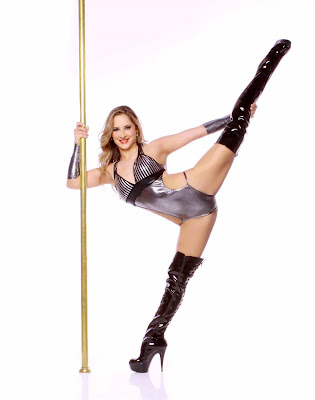 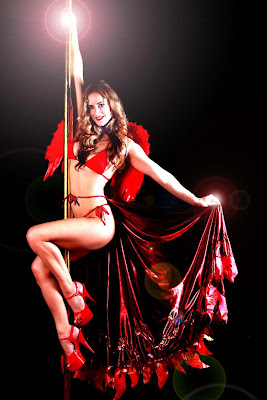 What made you get into Pole Dancing?
I've never really enjoyed any other fitness activities, so when I heard about pole dancing I thought it would be quite different and signed up for my first class. Straight away I was hooked! The acrobatics combined with dance really appealed to me, and after a short time I took as many classes as I could, which led to becoming an instructor at which point I gave up my old life as a Graphic Designer to teach and perform full time.

Had you trained in any other dancing before?
No not at all. In fact I was a bit of a couch potato! Which just goes to show that anyone can pole dance if they put a little time and effort into it. Having fabulous teachers at Bobbi's Pole Studio definitely helped. I was able to learn the technicalities of dance from highly trained ballerinas and cabaret dancers, so I got the best education in dance for our industry as it was already combined with pole.

What is your favourite thing about Pole Dancing, the performing, exercise, the glitz and glamour of it all?
Performing would have to be my first love. Nothing beats flying on the pole for a captive audience. But I also love that I've finally found a form of exercise that suits me. And who doesn't like sparkly costumes?

Now as we have all seen your flexibility is very impressive and graceful! Are you naturally bendy?
No! I couldn't do the splits before I started pole dancing, but I worked at it and eventually I got there. I've been lucky in that I can over-split with my centre split which is unusual. But I've had to work quite hard to achieve flexibility in other areas.

What stretching tips would you give for the splits?
Stretch as often as you can, but don't stretch until it’s excruciating - just uncomfortable. If you push too hard you injure your joints instead of stretching your muscles. And do different kinds of stretches, not just the splits themselves.

Did you find that Pole Dancing has helped improve your flexibility?
Yes definitely! Even without stretching weekly, many moves on the pole and floor work require flexibility so you're stretching all the time.

Would you say that becoming flexible is possible for everybody including people with no dance/gymnastic background?
Yes, with a little work everyone can improve their flexibility. I've had students that were totally inflexible when they started and can now do a beautifully flat split. And age is no barrier either. I have a student who is 54 years old and she is flexible and fabulous!

Are you nervous about competing in the World Pole Dance Competition?
A little, but in the end I'm just going to go out there and have a good time on stage! It’s healthy to have some nerves, but its best to focus on what's great about your routine, and how best to engage your audience.

Will we be seeing any surprises in your routine for the Worlds?
I have a couple of new moves and variations up my sleeve!

Finally what is your favourite pole move?
I have a few! I like 'The Allegra' of course, and the one-handed centre split on the pole. I really enjoy shoulder-mounts as well, and I like moves that 'flow' into each other. I have a new type of combination that I'll be busting out at worlds, that's definitely one of my favs too!

I have just installed iStripper, so I can watch the hottest virtual strippers on my desktop.