She is a mother, wife, a pole instructor from Los Angeles, CA, who has recently moved to the Midlands of the UK! Most known for teaching at The Choreography House & Cleo's Rock-N-Pole. Crystal has taught pole artistry workshops worldwide, and in countless online videos with Cleo's Rock-N-Pole as an online instructor.  Crystal says her biggest pole accomplishments have been in a group setting, while performing for Leigh Ann Reilly’s ‘Pole Show LA” in both L.A. and Las Vegas. 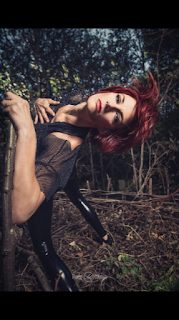 Crystal was pre-selected into the Pro Division at the California Pole Dance Championships in 2013-2015 taking home the Miss Congeniality award in 2013.She placed 2nd in the 2013 Pacific Pole Championships.  From 2012 - 2016 Crystal was a principle dancer in the production of “SEVEN” & “Girl Next Door Show”in Hollywood, California.  In 2013 she won Performance of the year with “Girl Next Door Show” and 2014 Runner- Up for Best Comedic Performance.  Crystal signed up for an intensive training course with the IPSF and became a certified judge for the International Pole Sports Federation and has sat on the panel of some of the most high profile pole competitions in the world, including the International Pole Championships (IPC), Pole Theatre UK, All-Stars Australia, Paragon USA, Pacific Pole Championship, CoTAC, IPAAT, UKPPC, FloorPlay UK, DanceFilthy UK, Authentic's, IPAAT, All Ireland Pole Competition and MMPDS.  Since arriving in the UK, Crystal has competed in the Pro Division at Pole Theatre UK 2017, performed at Glastonbury, Floorplay, Dance Filthy UK, UKPPC , IPAAT and MMPDS! And is now proud to be asked to judge the most established pole competition in the UK,  Miss Pole Dance UK professional division in 2018 at the Hawth theatre