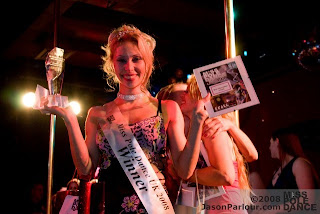 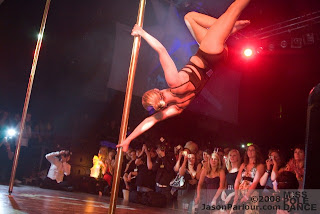 Miss Pole Dance UK annual championships was set up in 2005 and has always been about professionalism, education and innovation and the following recent article published in the Camden News is a classic example as to why we need to be educating some minorities


Contestants Alesia Vazmitsel, last years 2008 champion winner and Tracey Simmonds, who is also a qualified nurse, performing at last year’s Miss Pole Dance UK Championships at Scala, London where she came second and hopes to take the title this year.

So, what kind of licence do you need for this?

SPARE a thought for Camden’s licensing officers. With the nipple tassels of burlesque protesters still flashing before their eyes and a row over whether the Town Hall should class them as a striptease act, council officials are now facing their next scantily-clad nemeses: the pole dancers.
Hot on the heels of the July demonstration outside Town Hall which forced licensing chiefs to back down over their classification of burlesque as “adult entertainment”, the finals of the UK Pole Dance Championships gyrates into King’s Cross nightclub Scala next month.
Contestants aged 18 and over will perform athletic five minute routines to music in either the glamour or fitness categories at Miss Pole Dance UK 2009 – just a hundred yards from the council’s Judd Street headquarters.
Licensing officials say they are still “determining the nature of the event”, but according to the competition’s founder, Kay Penney, 43 year old mother of three, the night is about “education”, not titillation.
She said: “People are attracted to the pole because it empowers them. But it has been an uphill battle for us. At first, people thought we were all strippers, some even labelled us prostitutes. It is a form of fitness and an incredible art form with a real mixture of participants. Teachers, police, nurses – you name it, we’ve had them.”
She added: “We don’t bleach it up too much and get into our tracksuits, but there is a strict no nudity rule in the competition. If a costume even moves, the performer will be disqualified. I cut off the music and make an example of them.”
Last night (Wednesday), feminist campaigner and journalist Julie Bindel was among those who failed to be won over by that argument.
“There seems to be some fresh hell every day,” she said. “Whether the women are talented or not, their skills are not on display. It’s a shame King’s Cross is hosting this event when we were promised the sex industry, which was rife in the area, had been pretty much eliminated. These events normalise the sex industry.”
Ms Bindel said: “These twee arguments about pole dancing being a bit of ironic fun that makes you healthy are nonsense. Jogging makes you healthy. Dressing in next to nothing and sliding down a pole should not be seen as anything other than provoking sexual desire in men.”
Ms Penney, a retired health and beauty expert who took up pole dancing to get back into shape after her third child, said Camden’s controversial – and failed – attempts to place burlesque in the same category as strip clubs showed officials were “confused”.
She added: “I think they’re confusing pole dancing and burlesque with strip clubs and even prostitution, which is not what we’re about. I fully empathise with people that don’t understand because it’s something very new. Unless you’ve been to a show or even a pole lesson you’re not going to understand the incredible power and endurance that is required to do pole.”
Licensing officers will make their decision later this month.
A council spokeswoman said: “We cannot comment on the specific licence the Scala would need for this event until we have more information.”

I AM infuriated by Ms Bindel's comment. I have been learning pole dance/fitness for over 3 and half years and in that time I have toned up, lost weight and feel much healthier than I did pre-pole dancing. It has also given me the confidence to teach pole dance/fitness to others and to pass my exercise to music qualification. I have achieved much more from pole dancing than I have from going to the gym or jogging. I would love to know if Ms Bindel has ever been to a pole dance lesson. I pole dance for me, not my husband. All the pole moves I know are from pole schools not strip clubs. Pole dance is the best and hardest form of exercise I have ever had. It's about time people started accepting that. There are more important things to worry about in the world than a group of pole fitness professionals doing what they love and want to do.
Mrs Bond

WHAT an ignorant view, especially from a female. please take 5 mins to visit YouTube and see some of the skill for yourself. pole is just like gymnastics, only on a vertical bar not horizontal, and requires the same clothing and makeup as competitive gymnastics. Please don’t comment on something you haven’t experienced. However if you do visit a health club offering this and you consider it to be sleazy, the pole community would want to know and would welcome you view. I think this is unlikely to happen because you didn’t even take the time to do this before writing such a misjudged article.
K. Sands

IT is a shame that we have to put up with this negativity from a woman, who obviously has serious issues over her own self esteem, as she is unable to even be proud of her Miss or Mrs status, using the ever neutral Ms. Get an education MS Bindel before you judge...
S. Calvert

I HAVE been teaching pole dancing or pole fitness for 5 years now and would love to explain to my older students (50+ years old) and my male students (all of which are heterosexual men) that they are classed as a point of sexual desire by men (who are not allowed in my class unless they are training) I think the older ladies would positively split their sides laughing. Also in my class we don’t 'slide down the pole' as the aim is to work at height so everything is moving up the pole so how Ms Bland feels this is not going to get anyone fit or improve their core stability is beyond me (does she have the same view of rock climbing). Maybe she forgets that a lot of women and recently men actually enjoy pole not only for the strength aspect but for a word Ms Blind does not seem to comprehend and that is 'FUN'. I envisage the only place she has seen pole dancing has been on TV with the portrayal of strip clubs as opposed to in a dance studio where the students are dressed in shorts, t-shirts and bare feet or trainers with also a covering of bumps and bruises from the moves. Maybe Ms Bindels view is so feminist to the point of being the male perspective as obviously no woman could ever want to enjoy a sport like pole dancing/fitness for her self out of her own choice!!. Of course its all about the men isn’t it Ms Bindle? Thank you Kay for hosting the competition open to all and promoting a fabulous sport and thank you the wonderful Ms Bindle who has provide myself and my class with the largest laugh of the day.
G. Findlay

MS Bindle.. instead of being so narrow minded..and living in the dark ages and ignorant towards a very healthy sport that involves a pole.. you will soon realise that its more tiring to do than jogging around a block.. get over it .
S. Korver

I THINK that the composition of the front row in your photograph demonstrates that this is a celebration of women's talent primarily celebrated by women. Pole dancing is not justified as 'ironic fun' but is a sport pursued and loved by many dedicated women who are prepared to work hard to master their chosen art. Competitions like this are a source of inspiration and aspiration for those who love to pole dance, which tests their strength, stamina, flexibility and nerve. It takes some courage to hang upside down by your ankles. Anything that encourages such self-confidence and self-trust, promotes such a healthy attitude to one's body - and creates a supportive female community cannot be challenged as unfeminist. As a feminist academic who has studied historical attitudes to sexual display and an avid pole dancer I can confidently assert that pole dancing is not necessarily about titillation to those who practice it. How it is received is unfortunately not always within the control of feminists irrespective of their commitment to the cause. If Julie Bindel wishes to argue that competitions like this need to be curtailed because some men may attend to become sexually stimulated isn't the logical conclusion that women should avoid any activity or dress which may stimulate men, and that if they don't they will be seen to wish to attract sexual attentions. Isn't this the sort of thinking that Susan Brownmiller and Andrea Dworkin campaigned so hard to change?
Dr J. Osborn

I PITY Ms Bindel and her narrow minded opinion. I would of thought journalists kept with the times, clearly she is a bit behind in today’s world. It is obvious to me she knows nothing about exercise. To have an opinion, a respected opinion may I add, she should at least know what she is talking about. I feel sorry for such a negative woman, trying to run down others and what they have achieved, all it is childish jealousy. The outfits worn for competition are no more provoking than a swimmer, a runner, a gymnast. Unlike Ms Bindel, I have done my research and find her rather miserable opinions make me really appreciate the diversity in today’s world. Her comments are merely attention seeking hot air and she will no doubt enjoy reading the responses from everyone. Well isn't she big and isn't she clever!
R. Green