Each box represented the 24 competitors with the names of the competitors on the outside.
Each audience member was issued a yellow tiddly wink on leaving the theatre seating which they placed in the box corresponding to the competitor they voted for 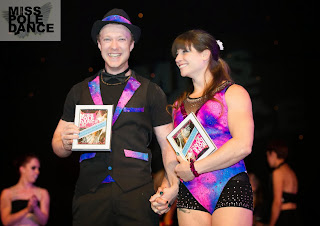 Kat & Dave's Bio
Kat owns Nottingham-based pole company PoleKat Fitness, and is passionate about pushing pole into mainstream fitness. Kat was supposed to be competing with her pole partner Jack, but after training him for a year, Jack quit just two weeks before the competition, leaving Kat with no dance partner. In a bid to show Kat how much he loves her, David, Kat's boyfriend, stepped up and offered to be her partner for the competition. Dave has never danced or poled before, and they had just two weeks to make a routine and costumes from scratch. Kat says that although she no longer expects to win anything this year, she couldn't bare the thought of pulling out completely and letting down all the amazing people that have come to support. Now she just wants to get out on stage and have some fun.