I've touched so many things in my life and started pole dancing at the age of 24, my other hobbies include horse riding, Circus, Gymnastics and ice skating 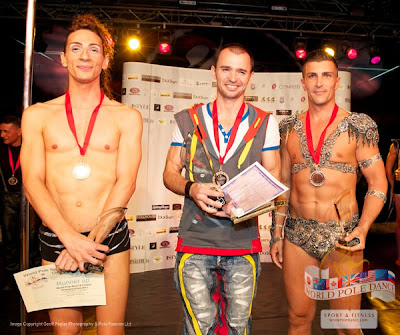 
Keem Martinez UK won 2nd Place at Budapest World Pole Sport and Fitness Championships - World Pole Dance 2011
With his unique performance dressed with his two legs tied together as a Mermaid
After his first performance where there the music failed at 1 minute 20 seconds he had the opportunity to dance and perform again – he took up that challenge dispite continuing with his performance with no music but just to the standing ovation claps and cheers of his name.
He was nervous that he wouldn’t have the energy to do it for a second time and would the music work again too?? It did, and his more relaxed performance won him second place – with the winner being Evengy Greshilov from Russia

Since the age of 16 I trained at the national conservatory of dance in Avignon France
At 18 I became a member of junior ballet BCP (Ballet de la Cites Des Papes) for 2 years
I have a Degree of modern dance.
After that I moved to Paris for dancing in The Musical show Gladiator for 1 year and after that Pal Frenak in Budapest for 3 years At the same time I was working for TV as a dancer & choreographer doing TV shows.
In 2008 as part of my training I tried Bi Kram yoga - I competed in an international competition representing France with my prize taking me to Los Angeles for the first time.

It was there I found my love for pole dance in a club. I watched in awe the pole dance performers. It was at that moment I knew this was my destiny.

When I arrived back to France I was in search of lessons which at that time there were non I met with Laurence Hilsum (currently seeded No.2 in the females World Pole Sport & Fitness 2011 category) who was my first teacher and inspiration from there she became my best friend.
I went on in search of work which lead me to the UK to gain my Pole fitness instructor accreditation and instructor training award with Vertical Dance headed by KT Coates
I went on to enter Britain’s Got Talent in 2009 demonstrating the art of pole dance piped at the post by Susan Boyle !!!

Feature performer and master class trainer in Hungary, Paris, London & feature guest performer at the box in London & teacher instructor at the Pole Dance Studios and Pole and Dance in Paris for Lawrence.