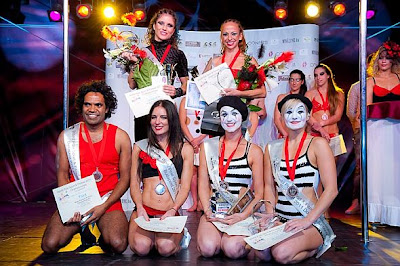 An incredible opening show from the Japanese male and female doubles wearing white costumes, demonstrating incredible spinning routines from one hand, where Masayo was suspended in the air with the palm of Kasuya's hand.
Next up was Kate and Kate from the UK with their fun suspensions and jokey performance using innovative combinations and mime suspensions from the neck creating a powerful performance. Barbara and Ilka from Hungary danced to Tears of a Dragon, a risk of a song as former world champion Felix Cane also used that song in her championship performance, they partnered shoulder to shoulder with incredible balance, both with equal strength and being flyers throughout their routine with creative new shapes, beautiful creativity and a perfect performance winning them first prize.
Cecilia and Ana from Argentina wearing a silver costume both red and white, had dramatic and moody music demonstrating suspensions away from the pole. They started in 2010 for fun and with hard training created their routine together.
The fifth competitors Michelle and Matty a mixed double had a superb acro balance beginning with incredible strength from both competitors melting and merging as one they have only been performing for 6 months together.
Last up was the Russian couple Olga and Valentina which had an operatic feel and movement to their presentation winning the best costume award for their category.

I've just downloaded iStripper, so I can watch the best virtual strippers getting naked on my taskbar.